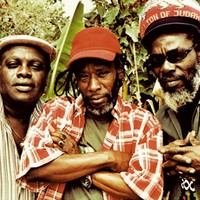 Mighty Diamonds are a Jamaican harmony trio, recording roots reggae with a strong Rastafarian influence. The group was formed in 1969 and remains together as of 2012. They are best known for their 1976 debut album Right Time produced by Joseph Hoo Kim and the 1979 release Deeper Roots.

Formed in 1969 in the Trenchtown area of Kingston, the group comprises lead vocalist Donald "Tabby" Shaw, and harmony vocalists Fitzroy "Bunny" Simpson and Lloyd "Judge" Ferguson.[1][2] They had become friends at school in the mid-1960s, and were originally called The Limelight, adopting 'Mighty Diamonds' after Shaw's mother started referring to them as "the diamonds".[3][4] Their smooth harmonies and choreographed stage show were inspired by Motown vocal groups of the 1960s, with Shaw listing The Temptations, The Stylistics, The Impressions, and The Delfonics as influences as well as Jamaican rocksteady artists such as John Holt and Ken Boothe.[2][3][4]

We've 171 songs of Mighty Diamonds in our database. Also we have the lyrics of some songs. Albums and Music.